This book was so adorable. As you could probably surmise from the title, Ruby's Slippers follows the theme from the Wizard of Oz. I loved this book. But of course, I'm biased because I loved the movie Wizard of Oz.

Dottie Meyers runs a farm in Kansas with her dog Otto after her mother dies. When a tornado hits the farm, Dottie wakes up in California with a surprising gift at her bedside: a pair of ruby slippers from her father. She sets off on a journey to find him, a man that she hasn't seen since she was four but visited her while she was in a coma. Along the way she picks up three more characters, all with Otto in tow.

One of the wonderful things about this book is that although it follows the themes of the original Wizard of Oz, the subplots go places that the original story doesn't go. Grief, self-esteem and family relationships are woven in with familiar "nothing is as it seems" theme of the Judy Garland classic. I also love the way she swapped out elements of the original story with more modern things (Munchkinland is a senior citizen community, hilarius).

Great book to have for your bookshelf.
Posted by Terri J. Haynes at 1:39 PM 1 comment:

Tea & Read: A Claim of Her Own 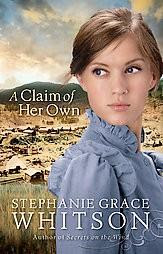 Title: A Claim of Her Own
Author: Stephanie Grace Whitson
Rating: Glad I got it from the library (average)

This is the third in a series of Country/Cowboy books I read. Unfortunately, this book gets the lowest rating of the three.

The story starts with a great premise: Mattie Flynn is joining her brother in Deadwood, South Dakota. She is on the run from someone in her past and believes she is going to start a new life with her brother. Unfortunately, things get worse before they get better.

The story takes some typical themes from the times, miners fascination with ladies, saloons, and gunfights, all things that make western historical great. Aron's characters was well written and likable. There was even an appearance of Will Bill Hickok and Calamity Jane (very cool).

I had several problems with this book. First, there is a Swedish character in the book and her dialogue is written phonetically (for instant the word what becomes vat). This became very annoying quickly as I had to keep stopping and re-reading the dialogue.

Second, the ending left something to be desired. I was disappointed how the main conflict was resolved since it was very deus ex machina. The buildup didn't match the resolution.

Third, this was a romance book, but there is very little romance between the two main characters. The subplot of two other characters has more romance in it. I thought it would have been better if there was a little more passion between Mattie and Aron.

I hope her other books are more enjoyable for me.
Posted by Terri J. Haynes at 1:14 PM No comments:

Tea & Read: Talk of the Town

Title: Talk of the Town
Author: Lisa Wingate
Rating: Two Cups of Tea
For some reason, I hit a serious cowboy/Texas run of books (see The Inheritance and A Claim of Her Own), so Talk of the Town fit right in.
Talk of the Town is Hollywood meets Smalltown story. American Megastar associate producer, Mandalay Florentio, has been tasked by her boss to plan the hometown episode of Amber Amberson, a finalist on the show. The problem is that Mandalay has no idea how fast news spreads in small town. When she shows up, the town is already buzzing with the news.
I really enjoyed this book. I love the creativity of Wingate in using multiple first person points of view. I particularly loved the Imagene Doll character and her dealings with loss and grief. Wingate gives a refreshing perspective on the classic story of Country Mouse and City Mouse, and the interactions between the two makes for great laughs and moving moments.
Wingate created believable characters, which I appreciate. Annoying characters is something that I think plagues Christian fiction too much. When characters are being ridiculous about their flaws, it makes it harder to connect with them. Mandalay and Imagene are real characters with depth and flaws without being annoying.
This is a great book and I am looking forward to reading more Lisa Wingate books.
Posted by Terri J. Haynes at 2:21 PM No comments: