My Life in Stitches: Wool Leaves...the project that will never end! 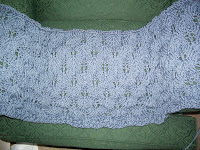 I am sooo ready for this Wool Leaves to be done. I think this is the longest it has ever taken me to finish a project. I don’t really know what is taking me so long to finish it…other than not working on it. I’ve decided to finish it this weekend while I’m recovering from my surgery. I’m stuck in bed anyways, might as well do something productive.

Last week I went to a writer’s conference St. Louis and of course, I had to visit a yarn shop while I was there (big thanks to Alisha for driving me and the rental car man for giving her an upgrade). I went to Knitorious on Watson Road. It’s a wonderful shop and the staff was friendly and helpful. Of course, I broke my no-yarn-buying-until-2012 rule. I bought a wonderful skein of Malabrigo in Stonechat and a skein of Elle Rae Merino Lace in a pink-purple (color #127). Both are gorgeous. I also bought some yarn to make Alisha a cowl for her trouble.
I made a new knitting friend at the conference, Allie Pleiter. She’s a writer and knitter and she blessed me with a skein Forisode by Noro. It’s really soft. Nothing creates an instant bond like gifting yarn. I love Allie. Check out her blog, http://www.destiKNITions.blogspot.com/.

I guess they should be motivation to get this Wool Leaves done. I need to move on.  I have lots of gorgeous yarn to get to. Plus the season is changing. I have scarves and hats to make. Sigh. I love knitting.
On another random knitting note, I saw the new Brooklyn Tweed book. It’s called BT Fall 11 and I’m getting it as soon as I can. It passes my three-patterns rule (a book has to have at least three patterns that I LOVE in it before I buy it. I have a lot of rules, don’t I?) I should be adding that to my collection soon. Take a look and tell me if it’s not wonderful. http://issuu.com/brooklyntweed/docs/bt_11_fall__issuu_/40

Making a Difference in the World

I’ve had an odd turn of events this week. On Wednesday, a strange man showed up at my door asking for money. He claimed to homeless and sleeping in his car, but he smelled to good. And not that I-covered-the-stench-with-cologne good. I’m mean clean good. I told him to try the church on the corner, but instead, he kept going door-to-door. It was just before the elementary school students would be home, so I called the police. The man left before they arrived. As a precaution, I drove to the bus stop to pick up my son.
I put the event out of my mind, but when I arrived home that night from Bible study, the police were patrolling my neighborhood with a spotlight. I live in a fairly quiet neighborhood and the police normally don’t come when we call, so I figured it must have been something serious.

Things were quiet yesterday. No police and no strange man, so I went back to walking to the bus stop. But when the bus came, two little girls got off the bus. I’d never seen them on the bus stop before but my son knew who they were. One of them was in the kindergarten and the other in first grade. They were both adorable little girls.
As my son and I turned to go home, my son turned to me and asked, “Who’s going to walk them home?” Then he asked them if their mom or dad was coming to pick them up. The girls didn’t know where their parents were. It was a no-brainer. My son and I walked them home, especially after the strange man incident.
Apparently, my son knew where they lived from riding his bike in the neighborhood. It was past our house, but not too far. And they were so cute, their backpacks bigger than they were, that the walk was enjoyable. Their grandfather arrived at the house just as we did. My Good Samaritan duties done, I went home.
Well, this morning while my son and I were waiting for the bus, a car pulled up beside me. It was the father of the little girls. He repeatedly thanked me for walking the girls home. He was relieved that the girls got home safely. Apparently, he slept through his alarm (I think he works at night). He said, “It’s good to know I have considerate neighbors.” I told him that when you’re a mom, you’re everyone’s mom.
As I walked home, joy filled my heart. I was so happy to have put another parent’s mind to rest. I’ve certainly had my days of running late from picking up my son and been worried out of my mind. As I pondered that, the Holy Spirit spoke to me.
He said that Christian need to broaden their idea on making a difference in the world. He pointed out that there is a lot of emphasis on street evangelism and getting people to accept Christ, but our Christian walk is more than that. It’s making a difference in people lives however we can.
That dad experienced God’s unconditional love through my simple act of concern for his daughters. All my son and I did was care. That’s making a difference, too. I think there’s not enough of that in the world, a sad fact since Christians are the ones who should be leading the way.
It is so easy to get sucked up into this worldly selfish attitude where everything is all about us. Where we only help others as long as it doesn’t inconvenience us. But Jesus commands us to love our neighbors as ourselves. That means loving our neighbor’s kids like we love our own. It means supporting our neighbor’s marriages like we would our own. It means meeting someone else’s need and not getting an attitude about it.
I think the misconception is that we have to do something huge or grand to make a difference, like starting a non-profit or doing charity work. I think we go through great pains to change the world out there. And this is true, but sometimes, all you have to do is care.  Opportunities to change the world will find you.
Posted by Terri J. Haynes at 9:32 AM No comments:

My Life in Stitches: No New Yarn!

It’s a bad sign when something that should be fun stresses you out.
Like buying yarn. It’s soft, colorful and so full of possibilities. Like buying yarn when someone blesses you with money to buy the soft, colorful goodness. That should be fun…but it’s that last part, the full of possibilities that sucks all the joy out of yarn buying for me.
Yesterday, I went to my local yarn shop to pick up some Skeins yarn. Someone I know is making a Travelling Woman in the Tuscany colorway, and I was in love shortly after seeing it.  I thought, if I buy any more yarn this year, I’m buying that.
Now let me explain about my yarn buying habits. I only allow myself to buy yarn when I’ve used something else in my stash. I have a tendency to be obsessive with my crafting supplies and buying way more than I need. And I’ve never met a craft I didn’t like. I have boxes and baskets of beads when I went through my jewelry-making phase. Not to mention all the crochet books and needles I own that I don’t use. When I picked knitting up again, I promised that wouldn’t be the case with yarn.
Having said that, I have enough yarn that I could knit for the rest of this year and not run out. And that’s after knocking out quite a few projects since my husband deployed. I vowed that I was NOT buying any more this year unless I already knew what I wanted to do with it or needed to go with something else in my stash. And I promised myself that, if I did break my rule, I would only buy what I really, really wanted.
So even though I loved the Skeins Tuscany colorway, I didn’t run to my LYS (local yarn shop, for you non-knitters). I behaved. I really, really wanted but it didn’t meet my other yarn-buying criteria. But then a friend gave me money for yarn, so…Tuscany it was. Since I was going, I also realized that I needed some brown fingering yarn to go with some Lorna’s Laces I already in my stash to make a Daybreak for a friend. Two skeins of yarn. That was all I went to get.
The problem came once I got to the counter. My LYS has a punchcard rewards system and after my purchases were rung up, I was really close to getting another punch. All I had to do was pick ONE more thing more than $6...
Just one thing over $6…
Sadly, I was in the store for over 45 minutes. There were so many choices. I saw lots of yarn I liked (more Skiens but in DK, Miss Babs is always a favorite and of course, my baby, Neighborhood Fiber Co) but I had no idea what I was going to do with it. So I couldn’t get it. See rules of yarn buying above.  And I’m working on the longest project I’d ever done, a Wool Leaves blanket (I made it bigger than the pattern) and I wasn’t going to be done for a while.
I even checked my faves on Raverly to see if I could find something I needed yarn for, but by then, my head started to hurt.  After wandering around for a long while, I spotted something that I did want. A PATTERN! It was Juneberry Triangle by Jared Flood. I almost screamed with joy!
So a nice trip to the yarn store turned in to 45 minutes of frustration, which only renewed my vow that I wasn’t going to buy any more yarn this year! It’s too stressful.
Posted by Terri J. Haynes at 5:12 PM No comments: