My Life in Stitches: Fixing my Fade 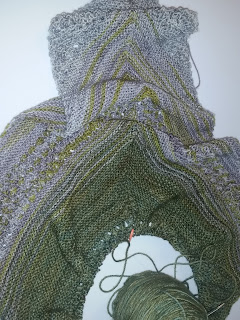 Everything thing was going fine until I didn’t like the yarn I used for the first color. So I started over. Liked my second choice so much better and blazed through the first five sections with minor problems.

Then I hit a brick wall. I could not get section six right. I ripped it out and tried again. I did the math and convinced myself that the pattern had an error in it. That was short lived because of the many knitters who had no problems at all with section six. I ripped it out one final time, ready to throw in the towel. I called my hubby into the room and told him I was about to give up on it.

He looked at me and calmly said, “Let me try.”

So I put the stitched back on the needles and handed it to him. And this sweet man quietly worked through the row while I continued to believe that there was something wrong with the pattern. I held my position…until he finished the row correctly.

And then I seethed at myself. I had blamed everything but my inability to keep track of the pattern. It was user error. I already knew I struggle with this kind of lace, shifting repeats and moving markers, but this was particularly bad.

While I berated myself, my hubby did something that is so him. Something that makes our relationship so great. He handed my knitting back and kissed me on the forehead and said, “I love you.”

And that’s why he’s the Wunderhubby. He fixes my boo-boos, kisses me and makes it all better
Posted by Terri J. Haynes at 10:12 AM No comments: