Equipped to Change the World

One of the young ladies, Sherilyn, in the young adult ministry my husband and I lead had an interesting prayer request one night after Bible study. We had a guest speaker come and talk about a documentary she was producing to bring light to the AID epidemic in Africa. As the guest spoke, the class was completely quiet, everyone engrossed with this ordinary person doing this extraordinary thing. And at the end of class, Sherilyn asked if we could pray for everyone in the class to know what resources we already have to change the world.

That class was two weeks ago and her simple prayer request still rings in my head. Of course that night, while we were praying, I asked God what resources did I have to make a difference in the world. And the first thing that popped into my mind was words.

I've been writing since I learned how to read and write. Words have always been a close friend to me and a journal was never too far away from me. And I have lots of words. But sad to say, until Sherilyn presented that prayer request, I didn't consider words a resource. They are just words.

I think that's one of the challenges of people with a natural gifting. We take the gift for granted. We can work to improve our gifts but human nature makes us discard the gift God gave us. And most of the time, that's the very thing wants to use to bless the Kingdom!

I can't say I've always known that God wanted to use my words to change the world. This revelation came about three years ago at my first writers conference. As I learned more about the impact that well written pieces make on human hearts, I felt like I had a light bulb moment.

The problem is that I'm not the best writer in the world (my Genesis scores prove that). I'm not a great speller and sometimes certain grammar rules escape me. I find myself wondering how God could use my words to bless someone? Don't I have to be a good writer in order to do that?

The truth is my resource is words. Not a book or a manuscript. Words spoken to lonely hearts, words written in cards, words of comfort spoken over the phone. God has given me the gift of words to be used wherever words are needed.

I have to remember that publishing is not the sole way God wants to use my words. A book would be great, but a card to a friend would be better. A publishing contract would make me feel better, but words of encouragement would make someone else feel better. I have the gift of words to be a blessing to others, no matter what format they come in.
Posted by Terri J. Haynes at 8:04 AM No comments:

Few things are more romantic than a bicycle built for two. Or more lonely. For this month's contest, what do you think are the most romantic or loneliest things?

For me, I think a milkshake with two straws is very romantic. It's something about being nose to nose over a drink, sharing sips and life, that touches my heart. And nothing can be more lonely than a lost shoe, forlorn and useless.

Email your most romantic/loneliest comment by June 30 and be entered to win a copy of Love Finds You in Treasure Island, Florida. Winners will be notified by email so be sure to include your email address with your comment.
Posted by Terri J. Haynes at 9:06 AM No comments: 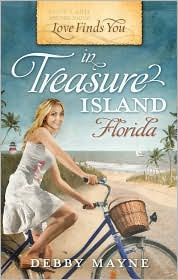 What is more romantic than a bicycle built for two? Debby Mayne certainly capitalizes on this romantic symbol in Love Finds You in Treasure Island, Florida.

Amanda Burns is the owner of a bicycle shop in Treasure Island, Florida. Each year, the handsome Jerry Simpson rents a tandem, a bicycle built for two for his aging parents. Soon feelings grow between Jerry and Amanda, but as Jerry's vacation comes to an end, they both fear of losing love.

Sometimes in a book, a character captures your heart. And sometimes it's not necessarily the main character. In this book, it's Jerry's dad, Harold. He sounded like he belonged in the movie Grumpy Old Men. As a matter of fact, the whole plotline of aging parents was a refreshing dose of reality for a romance book. Having Jerry deal with the problem of aging parents was a nice twist from the normal CBA topics of conflict.

This book is about loyalty and duty as much it is about love. Both of the main characters feel a sense of obligation to take care of their family. Jerry's struggle with his parents added great balance to the love story. Mayne does a good job of balancing seriousness with hope. Not something you find often.
Posted by Terri J. Haynes at 8:43 AM No comments: