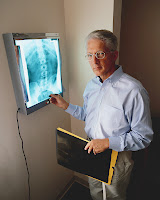 Tonight, as someone in my knitting group showed off their Knit Kit (more on that later), I realized something about myself. I am predisposed to crafting like people who are predisposed to alcoholism There are very few crafts I've encountered that I didn't love. And the only reason why I don't love a craft is because I haven't tried it yet (quilting is next on my list).

I realized something else tonight: I am at a crucial crossroads with my knitting. For the past year I've taken on simple patterns, scarves and wraps and that has worked for me. I'm right at the point that I can keep it a casual hobbit (do it when I can) or become completely submerged in it. Obsessed even. And the Knit Kit brought me to that point.

First let me explain what a Knit Kit is. The name says it all. It's a small plastic device that holds everything a someone would need for knitting on the go. It has scissors, tape measure, stitch counter, stitch holders, a crochet hook and more.

My reaction when I first saw it was "Oooh, I want one of those." Which set off a If-You-Give-A-Mouse-A-Cookie train of thought. If I buy the knit kit, then I have to go to a yarn store. If I go to a yarn store, then I'll have to look at yarn. If I look at yarn, I'll want to buy it. If I buy it, then I'll have to make sure I use it. And if I use it, then I'm going to have to become a serious knitter.

So the question remains, do I get a Knit Kit or not? At this point, it's not only an investment, it's a commitment. And I have to wonder do I want to go down that road. What road you ask? It's a very dark and scary road called Craftitis.

In my house right now, I have tons of crafting stuff that I don't use. I have bins of beads, crafting wire and clasps from when I used to make beaded jewelry. I have several sets of crochet needles and a couple of comforter bags of yarn. I have an extensive library of craft books. (As you can see, I have different variations of Craftitis).

If I buy the Knit Kit, I would be in essence accepting Knittosis Craftitis. Should I give in or get a second opinion? The jury is still out on that one.
Posted by Terri J. Haynes at 10:16 PM 1 comment: