Last year was a drought year for my reading. I’m trying to right that and get back into the swing of things. I’ve seen so many good books that I wanted to read that it’s a little hard to pick. I’ve decided to review two books a month, one fiction and one non-fiction.

Here us my January fiction review: 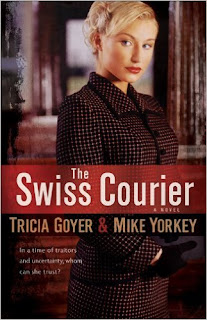 She's risking her life to save a man she doesn't know. But whom can she trust along the way?

It is August 1944 and the Gestapo is mercilessly rounding up suspected enemies of the Third Reich after an attempt on Hitler's life. Gabi Mueller is a young woman working for the newly formed American Office of Strategic Services (the forerunner to the CIA) in Switzerland. When she is asked to put herself in harm's way to safely "courier" a German scientist who is working on the atomic bomb out of enemy territory, the fate of the world hangs in the balance.


I seem to be on a serious WWI/WWII streak with my reading. This book takes a different angle than the other books that I’ve read. It is framed by the failed assassination attempt against Hitler and the subsequent retaliation. The book tells the story of spy operations in Switzerland. I loved this approach to a oft-told story set in WWII. I’ve read other books by Tricia Goyer and loved them. This book was on par with her writing ability and Mike Yorkey’s only added to what I loved about Goyer’s writing. My only complaint against this book is I kept forgetting who was who. This might work because it is a novel about spies, but going back to the character index broke the flow of the story. Overall, it was a good read to start the year off.
Posted by Terri J. Haynes at 12:00 AM