Last week, I had an interesting conversation with my eleven-year-old son. He was told how one night he was so tired that he went to bed without finishing his prayers. I asked him what normally prayed about, and to my surprise, I found out that he has an extensive prayer list. His list is so long because he’s scared of a lot of things and his overactive imagination doesn’t help. I talked him through some of his fears (“Baby, there are no cobras in Maryland so I don’t think one is going to come out of the toilet.”) and we were able to remove some of those things from his prayer list.

As I thought about our talk, I thought it might be good to do a little confessing myself. I had ridiculous fears of certain knitting techniques. I used to be a scardy-cat knitter. And sadly, the more I knit, the more I realize how ridiculous those fears are. Here are the first three things on my list of things I used to be scared of:

Lace. I love lace knitting now, but at first, I was terrified to try it. I kept putting lace patterns in my favorites on Ravelry, but I never believed that I could do it. Lace seemed to complicated, mainly because I didn’t understand it. Once I tried it, I was hooked. I think I like knitting lace the best. Project(s) that broke my fears: Take It or Leaf It Cowl by Marilyn Porter and Lace Leaf Hat by Laura Todd. 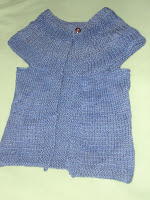 Anything other than shawls. My husband, who knits also, had made two sweaters before I attempted my first. When I read sweater patterns, they seemed so complicated. I decided to try a sweater KAL with my knitting group, Bridget by Courtney Kelley, and quickly bailed. I ended up trying the Shalom sweater and found it wasn’t as complicated as I thought. Project that broke my fears: Shalom Sweater by Meghan McFarlane.

I have more scared-y cat knitting to share next post and a few things I'm still scared of. What knitting techniques are you afraid of? Come, confess. It's good for the soul.