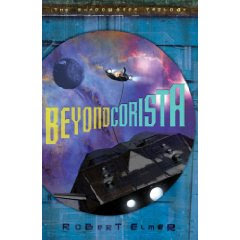 This book surprised me. I was a little afraid when I first started this book, I stopped and handed it off my thirteen year old son, thinking it would be better for him than for me. Boy am I glad I got it back from him.

This novel broke all my rules. First, it’s the third book in a series and I didn’t read the first two, which I thought would be a set back. But I had no problems jumping right into the story and connecting with the characters (see review for Enduring Love).

The second rule it broke for me is that I normally don’t read YA. I’ve read a Margaret Haddix Peterson book once but thought it was a fluke that I liked it. This book is not written as basic as Peterson’s books so it didn’t feel like YA.

The third rule it broke is the face that it’s Sci-Fi. Now don’t get me wrong, I love watching sci-fi and everything from Mork and Mindy to Star Trek to Star Wars. I just don’t read sci-fi too often. Ok, none that I remember.

I think the best thing is that Elmer laid the Christian symbolism on thick, but it wasn’t annoying. I know it was done so that younger readers could catch the symbolism but it was tastefully done. I loved the Pilot Stone and Jesmet. And I particularly love the way Elmer showed that biblical truths can transcend time and space. Oriannon’s encounter Alymas was quite beautiful.

I would recommend this book to any tweener, especially boys. Now I can give the book back to my son.
Posted by Terri J. Haynes at 6:21 PM