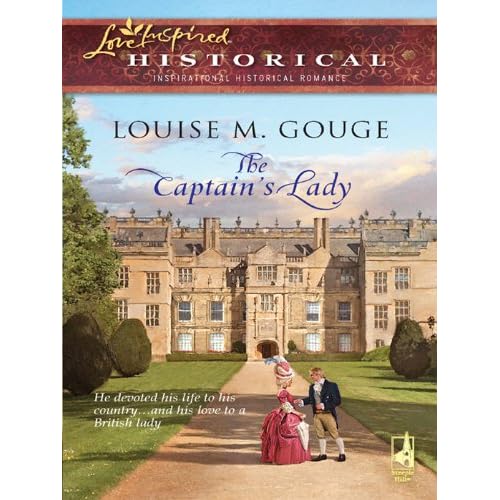 A few years ago, I refused to read any historical fiction. For some reason, these types of books didn’t appeal to me. Then I read Pride and Prejudice and the tide turned. I can’t say I’m a complete historical fiction fan, but I appreciate when I come across a good one. And The Captain’s Lady is a good one.

It is the story of Captain Jamie Templeton, a Loyalist merchant sent spy on Lord Bennington, a member of George III Privy Council. The problem is that Jamie is in love with Bennington’s daughter, Lady Marianne Moberly. Not only must Jamie perform his duty to the rebellion, he must resist his feeling for Marianne.

There are several things I love about this book. The book features characters from Gouge’s first book, but it is not necessary to read the first book to follow the plot of the second one. I’ve seen very few authors who can pull off this feat and Gouge does it well.

Gouge has clearly done her historical research. She puts you into the setting and makes it another character in the book. She does a wonderful job of capturing the Victorian time period and setting it against the mood of the rebelling colonies. I also like the way she used the conflict between the colonies and England on a personal level between Jamie and Marianne.

I think that Jamie stole the show as far as characters in this book. I loved his moral dilemma between his faith and his duty. It was interesting to read because I’m not sure what I would have done if I had been alive during this time. I’m sure I would have fought against injustice, but I’m not sure I would have chosen to take the path Jamie did. I also enjoyed Jamie’s induction into proper upper class of society. Especially since he’s a sailor and sailors aren’t normally concerned with such things.

The conversion of Robert was one of the most authentic I’ve read in a long time. It wasn’t overdone or cliché. Meaning, if I was in Jamie’s position, I think I would have handled Robert’s conversion exactly the same way. Some many times salvations and conversions are so stifled and unrealistic in books that they become a turn off. Gouge handles this one beautifully.

The plot is solid and keeps you turning the pages. Gouge is a good solid writer and her books will find a place on my bookshelf.
Posted by Terri J. Haynes at 2:46 PM