Tea & Read: The Sweet By and By 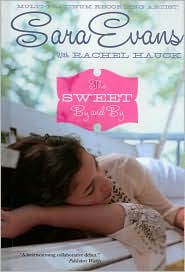 Title: The Sweet By and By
Authors: Sara Evans with Rachel Hauck
Rating: One cup of tea


The past is the past, right? If only it was that simple for Jade Fitzgerald. As she prepares to marry, she finds her skeletons won’t stay in their closet. Her mother returns to her life and brings a trail of painful memories with her. Jade finds herself struggling to keep her damaging history from ruining her future.

Jade, her fiancé Max, her mother Beryl and her sister Willow are all complex characters. Jade refuses to face the mistakes she’s made and focuses on her mother’s hippie lifestyle and her parent’s divorce. Max seemed dualistic, holding Jade to a higher standard that he was not willing to live by himself. Willow’s sassiness perfectly fits a young woman with her background. Unfortunately, none of the characters seem to flow together. Their stories are intertwined but they lack a level of cohesiveness that creates good tension.

The lack of tension continued with Jade’s parent’s divorce. I found myself wondering why their marriage actually ended. It didn’t seem realistic since their relationship seemed so idyllic. Along with that lack of tension, the novel read like a women’s ministry manual. Strained family relationships, abortion, illness and unforgiveness all find their way into the story in a very predictable way. At times, the story became very cliché along with a slow pace.

Also, the story’s climax and resolution left me wondering what the climax and resolution was. Jade has an ambiguous encounter with God, but it’s not clear what exactly happened. It was also hard to get into the moment of the encounter because it had supernatural overtones. The moment ended up being very “God in the Machine”, a tidy but annoying way to show character change.

Two things about this book left me confused. The first thing was the prologue. I’m not sure why it was included in the book. It does give some background setting, but very little. The second thing is the title. I’m not really sure what the title actually has to do with the book. I thought maybe it wasn’t that important since it’s in smaller print that Sara Evans name (if one wasn’t paying attention, she might think the book was called Sara Evans).

Having said all that, I will say that the writing was above average. Evans and Hauck add many stunning lines of imagery to the novel. The chapters were short, which helped the fact that the pacing was so slow at some points. Evans and Hauck also applied a normally annoying flashback technique, (one chapter present, next chapter past) in a good way. The flashbacks seem seamless, which it great because this technique is normally jarring.
Posted by Terri J. Haynes at 8:23 PM